I had a lovely last little walk around Newtown on Tuesday morning and then a really close call when I slipped on the weed covered ladders on the quay trying to get back in the dinghy and came a gnats cock from falling in the water with the dog under one arm, iPhone in my pocket and camera around my neck. After just managing to hang on with one arm I composed myself and then checked that no one was was looking although unhappily someone was! Some salty old sea dog was watching me from the boat house with a wry smile on his face which said ‘You complete penis’!
That would have been very cold, very expensive and very embarrassing but I got away with a wet foot and trouser leg!

The anchor took a bit of work to get up as it had buried itself deep in the mud over the last three days. I had to motor it out which involved pulling as much chain in as possible, winding it round the deck cleat, going back to the helm and giving it a bit of forward throttle, then back to the bow and retrieving the anchor covered in sticky black mud that goes all over the deck! Lovely.

Whilst anchored in Newtown I checked a few more electrical connections so on the way out I tried again to recalibrate the auto helm compass. Again, no joy at all so I just carried on to Lymington which took a couple of hours. As I got to the marina area of Lymington the Isle of Wight ferry at the dock let out one short blast to let everyone know that it was about to depart. Fortunately the Captain waited for me to go by as I was already really close and I carried on past before turning behind him and going onto the pontoon.
My time in Lymington was mainly about boat jobs including talking to Raymarine about my auto helm issue. Unfortunately they no longer make the fluxgate compass that I have but they can repair them if you send them to the service department. However, that takes about three weeks so after talking extensively to a guy in their technical department I ordered the internal part which, fingers well and truly crossed, is the culprit. This arrived yesterday by courier so now I have to take the old one apart which isn’t difficult and try the new part. I didn’t do that yesterday because it was 3pm before it arrived and I had a deadline to meet! Head Office is coming for a visit this weekend arriving tonight (Friday) and we arranged to meet at Poole Harbour so yesterday at 3.30pm I waited for a ferry to leave, followed him out and sailed out of the Solent bound for Poole Harbour.
What a fantastic sail! The tide is pretty special around here. It was bubbling and boiling all around the boat, there were overfalls that make it look like its about 2ft deep when its actually over 100ft deep and there are also strange smooth churning patches where a loud hiss can be heard from inside the boat as you sail through them. We had some pretty nasty chop with quite a lot of water over the deck before the tide turned and the sea state calmed down. We went through the entrance and into Poole Harbour at about 8.30pm and anchored in South Deep anchorage just as it got dark. Great sail, I loved it.

As I have mentioned, Sarah is arriving tonight and will be with me until Tuesday and tomorrow my Mum, Joanna, Tom & Jack are coming down too and staying until Sunday. Fiesta is going to be full with all onboard but it will be great to see everyone. Today I will move from this anchorage to Poole Quay Boat Haven, get Fiesta ship shape and hoist the Canadian courtesy flag. I forgot that last time Sarah was here and the absence of said flag was noted!!

One thing that I have always annoyed myself with is not sailing to windward very much on this boat and instead, just motoring upwind. Truth be told, going to windward is the achilles heel of Fiesta. This is a weak point for most cruising catamarans and the Prout Event is no exception. This is to do with some of the reasons that it is so good in other areas such as shallow draft for getting to places others can’t reach, the ability to take the ground and remain level and the fact that catamaran stability means your beer doesn’t fall over when you put it down whilst sailing. Tacking a catamaran is much slower than tacking a monohull due to the increased resistance of turning two hulls through the water rather than one and because they are not as efficient upwind as a monohull you need more space and more time. Space between sandbanks or on the rivers of the East Coast is at a premium and time, when you have to make it to and back from a destination before work on a Monday, is too.
On this trip I have all the time that I want, plenty of room in all the deep water and as this is a sailing trip rather than a motoring trip I have been viewing tacking as a pleasure rather than a frustrating way not to make much timely forward progress. So I sailed out of Newtown and tacked across to Lymington (ok, not very far I admit) but I also sailed from Lymington to Poole Harbour in a force 3 to 5 headwind. I really enjoyed it and as we all know, the more you do something the better you get and I have really started to learn how to coax Fiesta upwind and with the right amount of sail up, a more delicate approach rather than forcing her to go upwind we are making good progress. Fiesta of course hasn’t changed but I have definitely improved.
That’s one of the things I love about sailing. It is impossible not to get better the more time you spend on the water and whilst you don’t really know why or how you get better, you just do. You can learn the science straight out of a book in the warm and dry but the ‘feel’ is something that grows and improves for as long and as many years as you sail. I read somewhere that ‘Sailing is a cruel Mistress. First you get the exam and then the lesson’. So true!
Sorry if it sounds like I’m talking bollox but I’m just really happy to feel like I’ve improved!

You get up close and personal to the ferries at Lymington 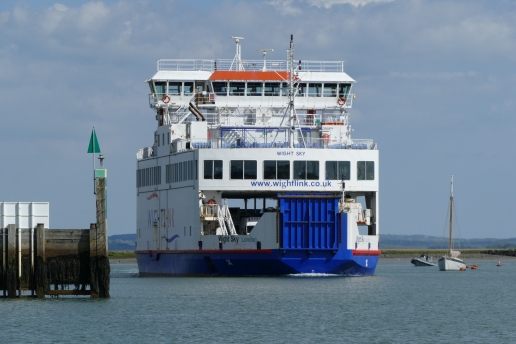 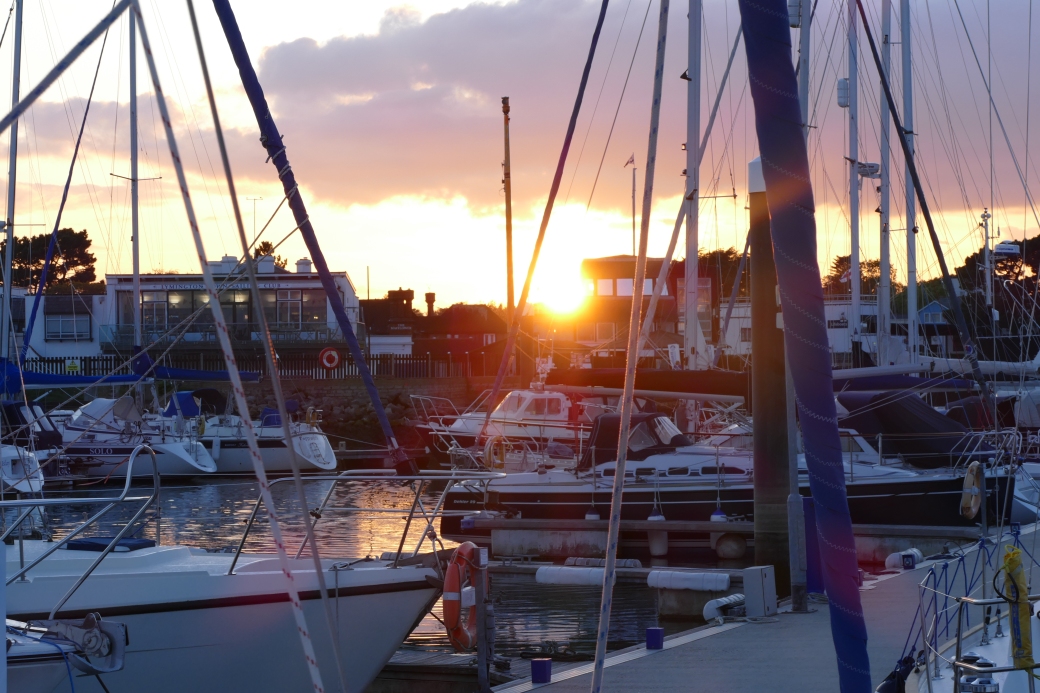 Strong tide equals a fast exit from the Solent 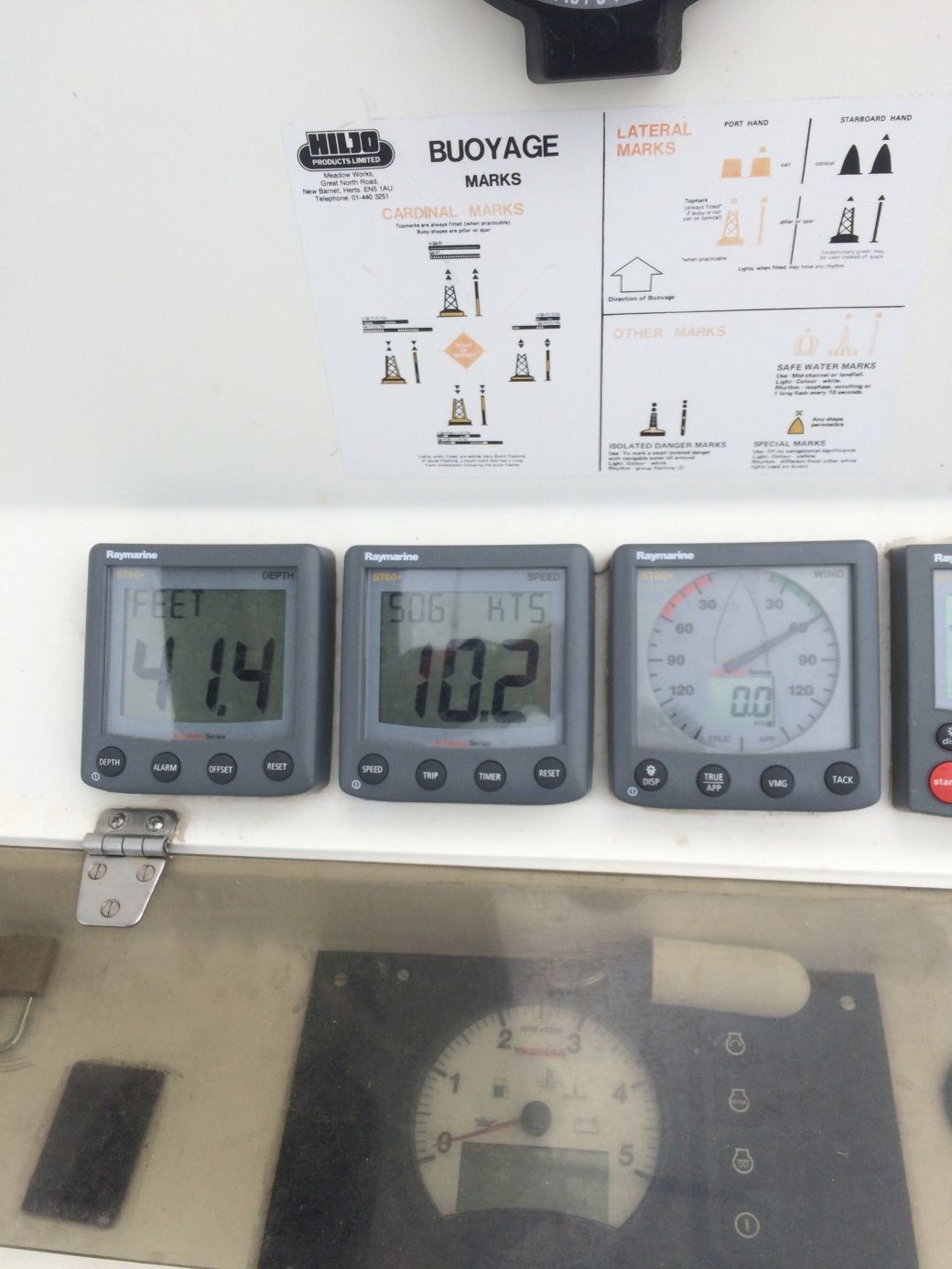 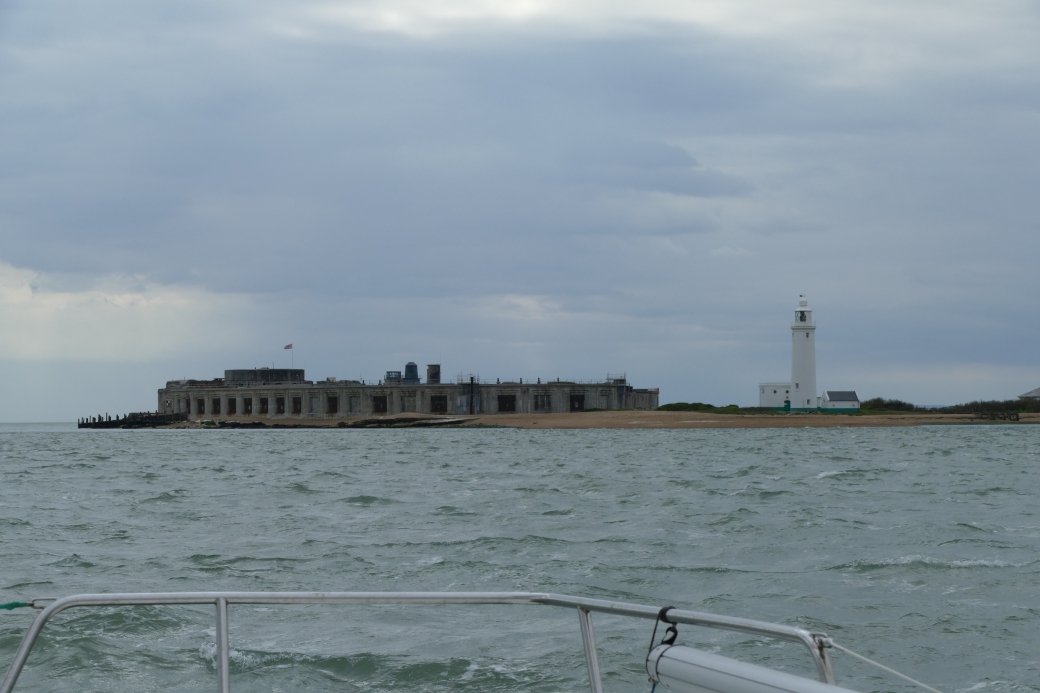 The Needles, fading light outside Poole Harbour and I love a picture of the Ensign, any time anywhere! 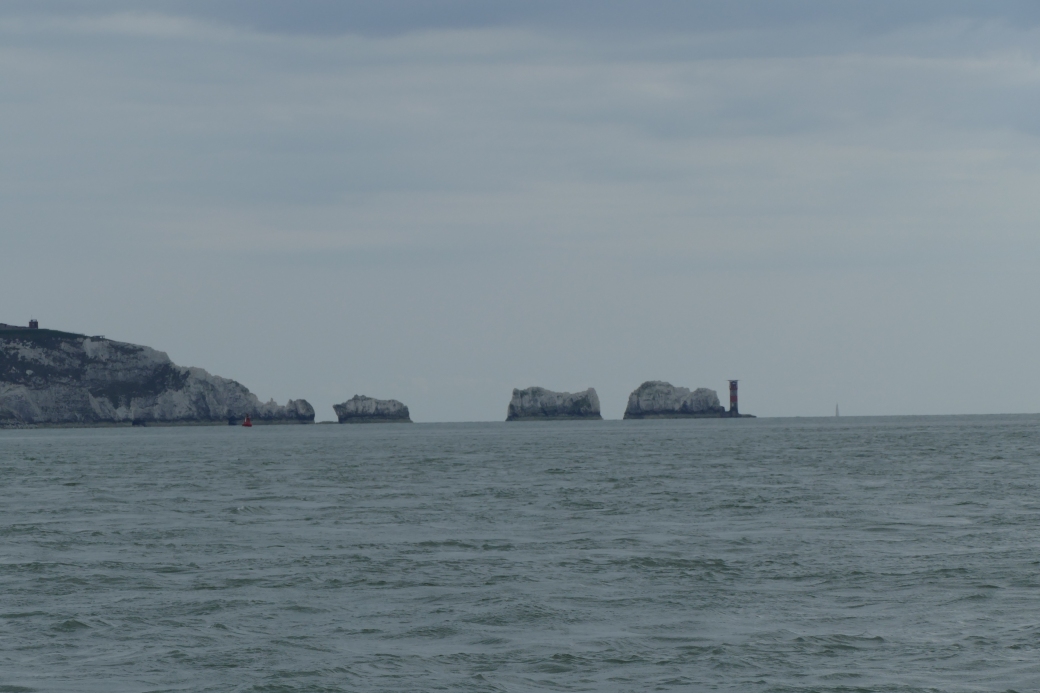 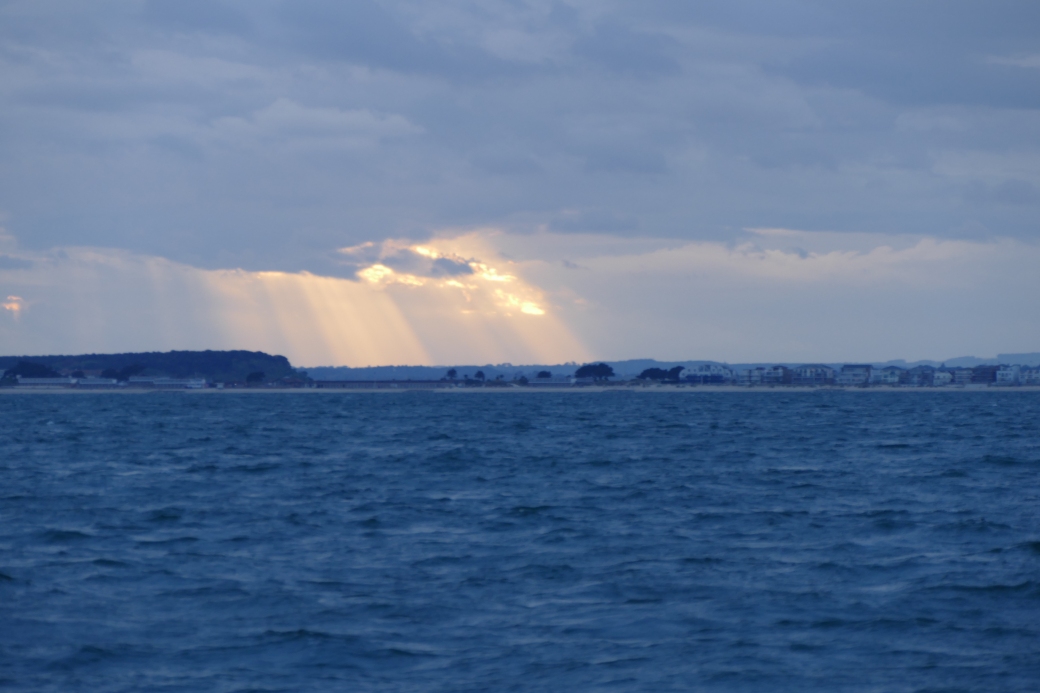 2 thoughts on “Lymington and on to Poole Harbour”