Skip to content
The shelter offered by Soay was wonderful and gratefully accepted. I loved the delicate balance between being social and having complete and total solitude in my little anchorage. Saoy is the kind of place that I dreamt of for this trip. We all know that we are well and truly on the radar these days and for many this is fine and dandy but there is a sliding scale of acceptability for others. I am somewhere on that scale. Quite where, I don’t really know and because of mobile phone service (albeit sporadic) my guess is that I will never fully find out unless I throw the phone over the side which I’m not about to do! What I do know is that I love being under the radar / off the grid but I do miss my family, my friends and Sarah (no order there Sarah!) but not so I want to abandon this trip to be with them. Knowing they are all there is comfort enough to allow me to appreciate my little world of water. I think about all the people I know, love and like frequently and I try to think about people who I know albeit not very well. I don’t want to get home, see them and think ‘I never thought of you once’ so my mind is pretty active.
I think about my Dad a lot too and with pictures of him around the boat he is never far from sight and in fact I feel closer to him being on this trip than I have since he slipped his mooring and left for his super-yacht in the sky. I bet he’s loving it. The perfect boat (which only exists in heaven), no mooring fees, constant force 4 in the right direction and hot mermaids! The closeness I feel must be because I am doing something that I know he would have loved to do and also because I have plenty of time to think. This is the time that eludes anyone living a ‘normal’ busy life. These thoughts are not sad, they are warmth and comfort and I love the fact that this trip has enabled me to feel like this. Joanna wrote me a note on a postcard as part of a box of leaving presents that my family gave me and on the card she wrote that she is proud of me for untying the lines and doing one! She also wrote ‘I know that Dad would be so proud of you too’. I love this post card and I use it as a book mark (yep, this educationally unenlightened Essex Boy is reading now – mainly ladybird but it’s a start) so I see and read it often. The funny thing is, and I don’t wish to sound arrogant but I know my Dad would be proud of me for what I am doing. He was a believer in living your dreams and he managed to balance this with working to support a family and taking us with him on his dream which was basically sailing as much as possible which we did throughout all of Joanna’s and my childhood. It was the stuff of Swallows and Amazons that lasted from my first sail at three weeks old through weekends away, family sailing holidays, learning to sail in a dinghy that Mum & Dad bought for us, investigating creeks in that very dinghy to being a young man with raging hormones and a head full of questions about life and what lay ahead. What I never questioned was my total and utter love of being on a boat and sailing. As Joanna and I got older, other things like holidays with friends and racing small boats had their place but the adventures on Fiesta continued and Dad and I embarked on a few ‘boys only’ trips up the East Coast. These good times rolled until the original Fiesta was sold in the year 2000.
Here she is… 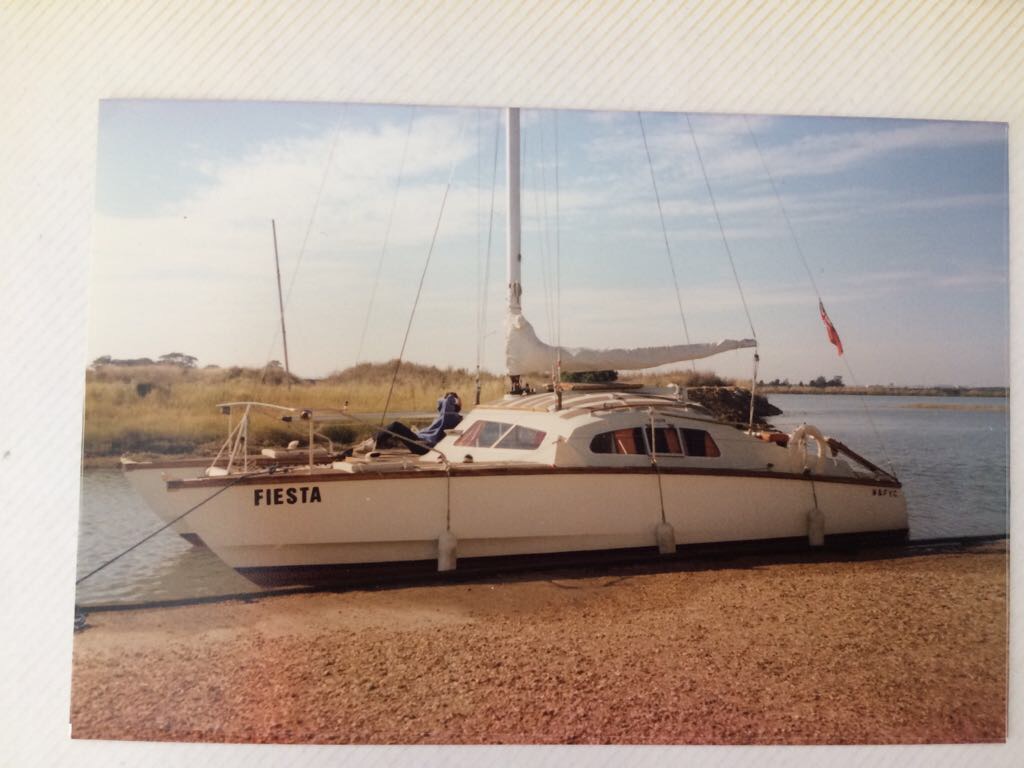 That was 20 or so years for me so the fact that I can’t get enough and have taken up the mantle of being afloat as much as possible would make Dad proud. Much has changed over the years except the feeling that doing this gives me. It is the same feeling that I remember from when I was in my childhood. It’s fantastic, magical, rewarding and it’s freedom. That dude Ratty from The Wind in the Willows had it right. When Mole questioned him if being in a boat was really that good, Ratty said ‘Believe me, my little felching friend, there is nothing – absolutely nothing – half so much worth doing as simply f*cking about in boats’….
I couldn’t have said it better myself Roland.
I left the shelter of Saoy in a very wet force 7. I don’t usually venture out in a F7 by choice but I needed to get to Mallaig because a family reunion was scheduled! Fortunately the forecast had done what it said it would do and the F7 was from the northwest which meant a dead downwind sail from Soay round the bottom of the Sleat Peninsula and across to Mallaig. What a cracking sail! The wind had been blowing all night so had the time to build up a good sea and once I tuned the corner out of Saoy and headed downwind it was nothing short of mind blowingly fantastic and beautiful out there.
Big rollers with dark grey clouds and hard rain gave it an ominous look to set the scene for a bracing tale of survival on the high seas. However, Fiesta put paid to that by settling down with impeccable manners and taking it absolutely comfortably and effortlessly in her stride. After about thirty minutes of steering with the full genoa rolled out I realised that I was making a meal of it. I switched the auto pilot on and was immediately disappointed in myself but wholeheartedly impressed with the better course being steered by the computer.  In fact, everything was so under control and comfortable that I went down below to make my own meal of it with bacon and eggs while Fiesta carried on about her business of a consistent 7 knots plus a few 9.5 knot surfs down the waves while I looked out the window as the bacon sizzled! She might not be the latest and greatest but the Prout brothers knew what they were doing with cruising cats when they were building them in their sheds on Canvey Island.
Mallaig is a beautiful little harbour. It’s main purpose is still commercial and it is one of the oldest fishing ports on the West Coast. It was only in 2011 that they squeezed a fifty berth marina in the corner and being surrounded on all but it’s north side it is a lovely shaven haven. Sorry, I mean sheltered!
I got in, moored up and set about bleaching and scrubbing both top and bottom sides and gave myself another haircut before I turned my efforts to Fiesta.
Mum (Doris / Wendy / The Old Doris / The Old Dear / D4 / Nanny D / The Old Boiler – but let’s just use ‘Mum’ for the purpose of this), Joanna, James, Tom and Jack arrived after flying from Stanstead and then hiring a car for the three and half hour drive from Glasgow to Mallaig. Now, what with Burnham-on-Crouch being in deepest darkest Essex and one of the original founders of the definition of a close family (hair lip, club foot – that sort of thing) it shouldn’t be a surprise to know that being just over three months since I left Pool Harbour, this was the longest time in my life that I hadn’t seen Joanna so it was fantastic to see her again and indeed all the family.
They arrived on the 5th of August which happened to be Tom’s 10th birthday so Fiesta had been adorned with some balloons, banners and a chocolate cake and we had a great dinner and birthday celebration for Tom. 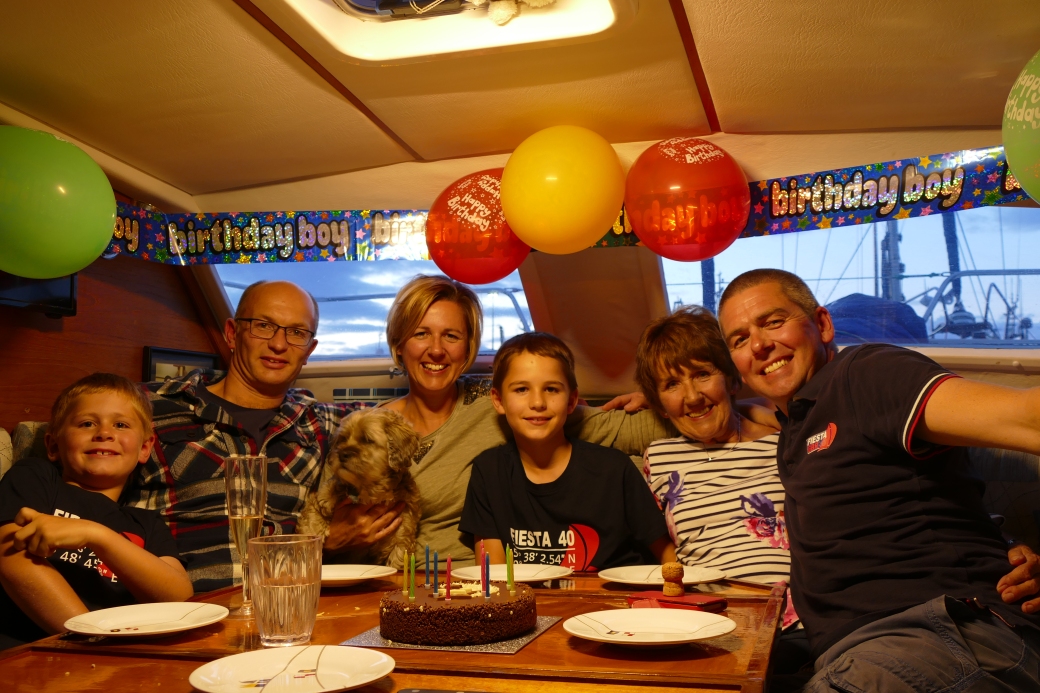 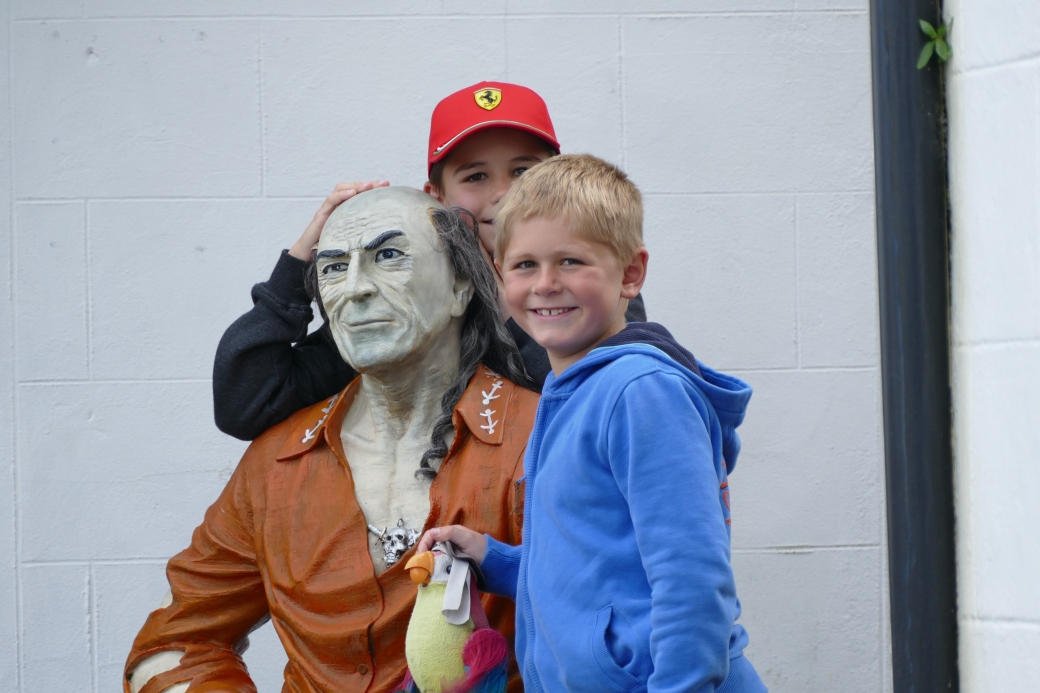 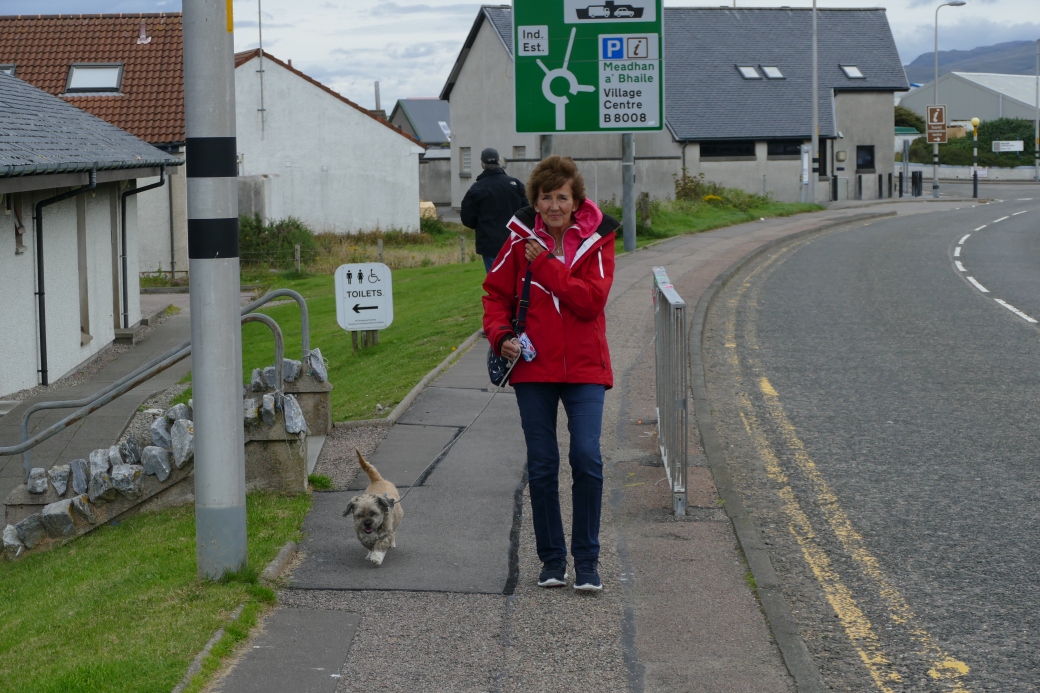 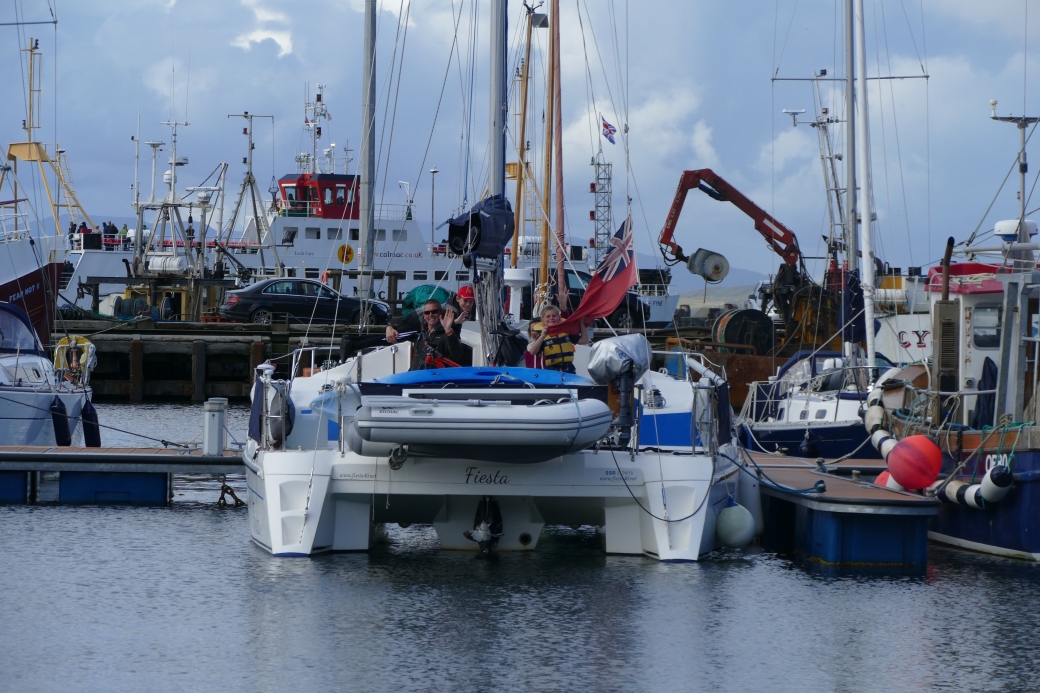 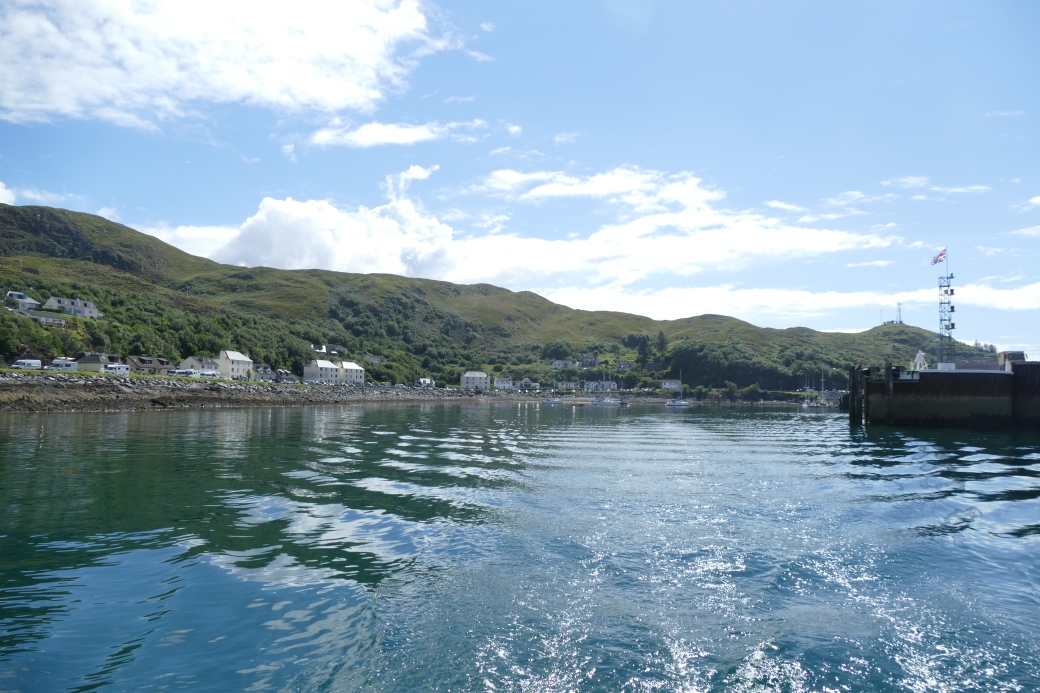 Sandaig Bay anchorage, an old abandoned cottage that used to belong to an ex Eaton Master called Raef Payne and was near to Gavin Maxwell’s cottage before it burnt down. Lovely sunny day at Sandaig, a few campers on the beach enjoying the ‘Right to roam’ and a large cheers from me!

Beautiful night at Isleornsay but as the navtex foretold, it was the calm before the storm 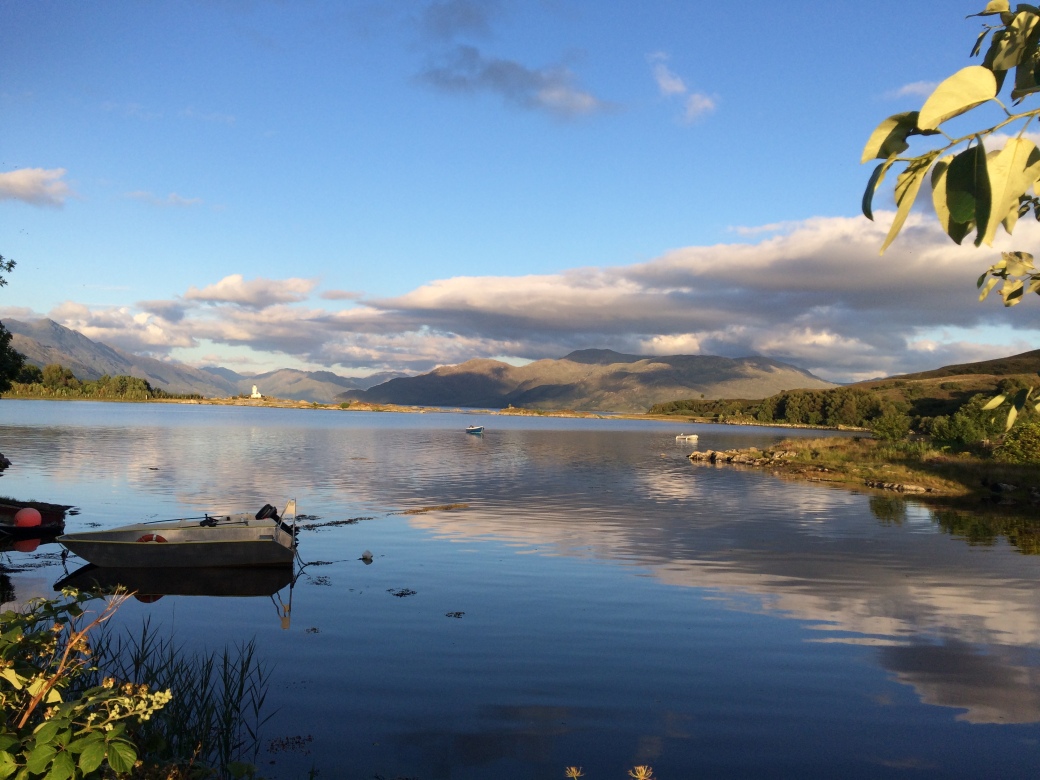 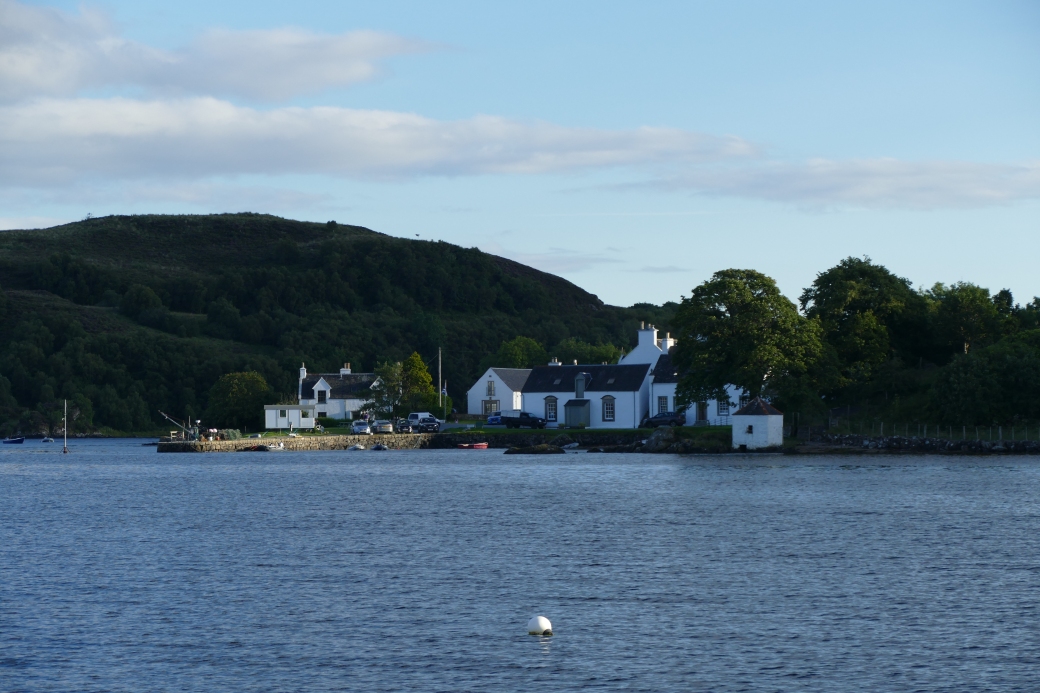 After the gale everything was back to normal (?).
You can stay mate but no sh*tting! 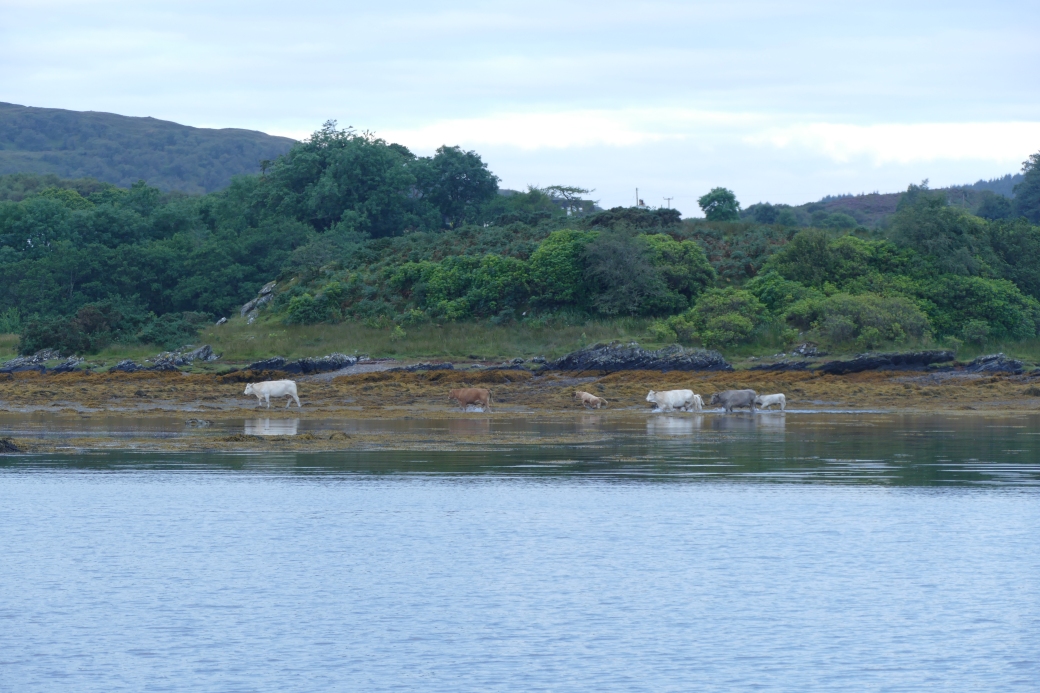 Entering Kyle Rhea and being swept through.
Moored up at the Kyle of Lochalsh with a view of the Skye Bridge 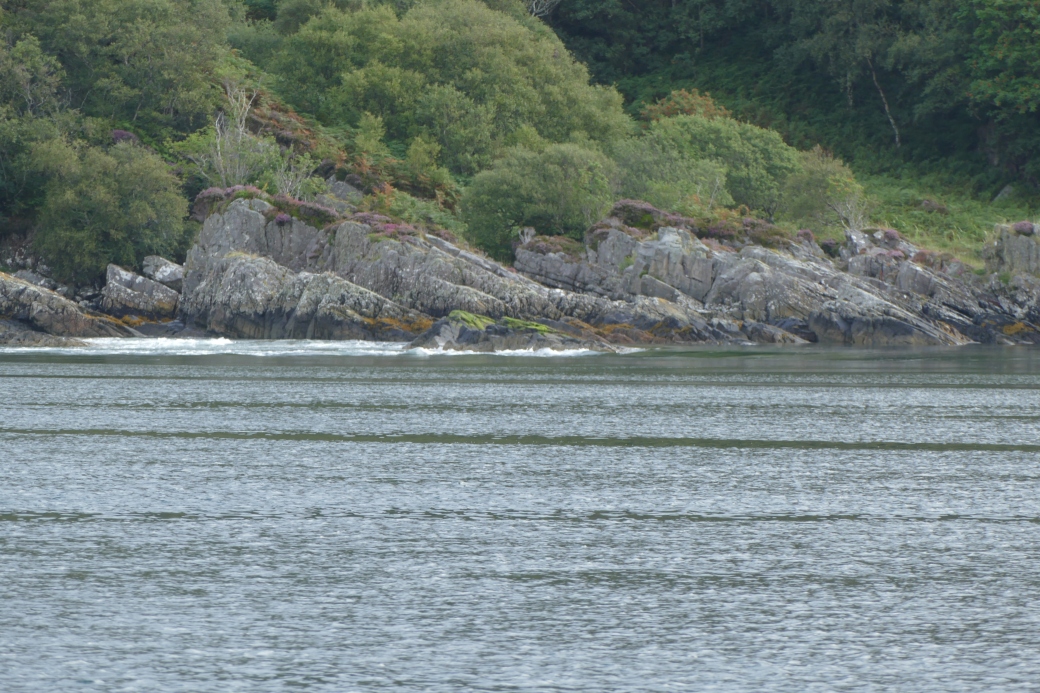 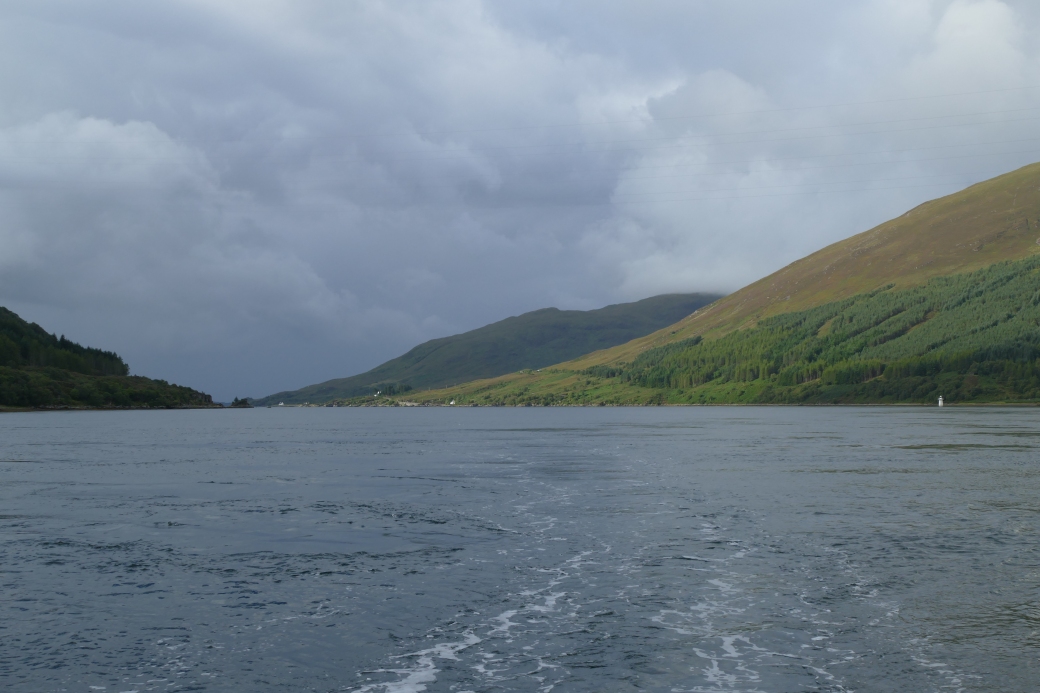 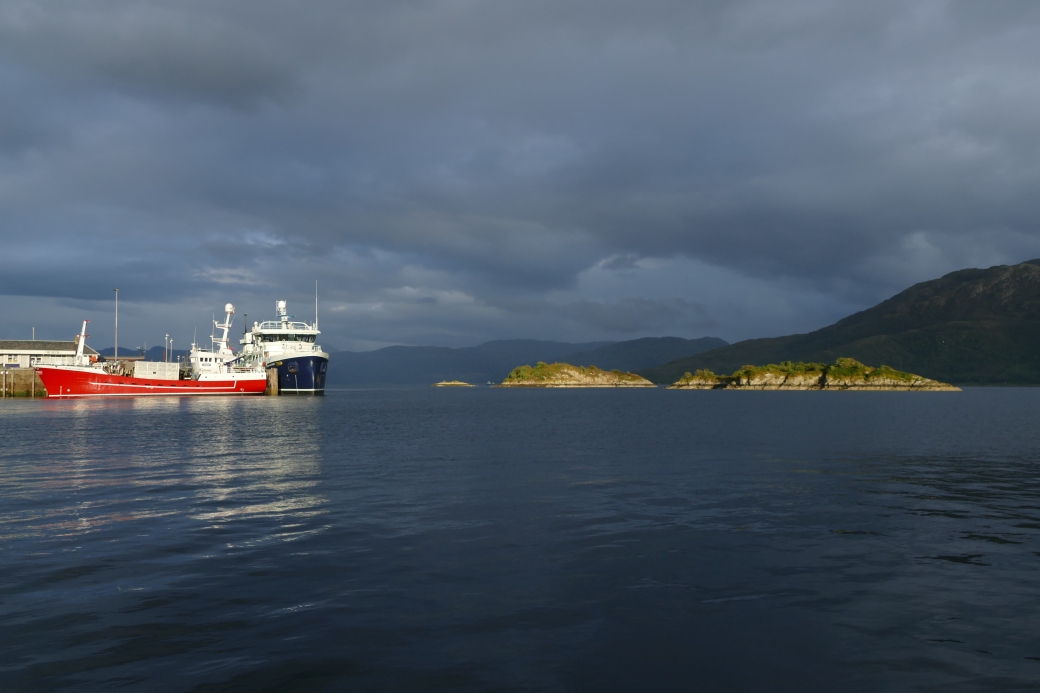 One thought on “Mallaig, the invasion, Mr Maxwell, a good blow and onwards to Stornoway”