Oban was about an eight mile hop from Easdale and there was a gentle breeze blowing so we rolled out the headsail and crept along through the Firth of Lorn and up into Kerrera Sound. I have decided that Scottish people talk boll*cks about their weather. It was another day of blue skies and sunshine but I don’t blame them. I’d want to keep it quiet too if this was my home!
Going up Kerrera Sound there are several rocks and dangers to avoid and although they are all marked, the channel meanders and you can easily become distracted by the beautiful scenery so you have to remember to keep an eye on the charts as it’s not all deep safe water. What we didn’t have to worry about was any tidal races. This part is slow moving and in fact we timed our departure for Oban out of convenience rather than to suit the tide. When we left Easdale the tide was just turning to go out so it would be against us all the way but in total contrast to Dorus Mor the tide runs at a maximum of a knot or so which wasn’t going to make any difference to our short hop or relaxed schedule.

Oban has several mooring options including mooring buoys offered by Oban sailing club and Oban Marina itself which is opposite the town but includes a ferry service across to Oban. Sarah is pretty good at bearing with me because despite these viable options I have become a bit obsessed about balancing the books by anchoring whenever possible. I’m trying to keep this in check though because way back when we anchored at St Mary’s in the Isles of Scilly and bumped that rock in the night we were about 50 yards from a visitors mooring buoy that was in deep water and would have cost a tenner to use for the night so I have to make sure that I only anchor when I am absolutely sure the depth of water at low tide and weather suits. It’s not just the money though, I really feel ‘off the grid’ at anchor and to me that feels good.
We anchored just off a small island about half a mile north of Oban Marina. There was a stiff breeze blowing and behind us was a rocky shore but after giving it twenty minutes or so the anchor was holding Fiesta well so we jumped into Doris to go to Oban. Doris is the blow up dinghy that my mum bought for me and because of her kindness I named it after her although my mum’s name isn’t actually Doris at all but Wendy! However, Mum has been affectionately known as ‘The Old Doris’ or ‘Doris’ for short by Joanna and I from way back before she was actually old! We never checked if Mum was happy being called this but that’s not the point of a nick name is it. You don’t get to pick your own, or at least you shouldn’t, and if I have to live with being known as ’Total and utter C*nt’ then Mum can damn well deal with being ‘The Old Doris’!
Anyway, we went ashore and with Oban being my second favourite whisky I had been looking forward to turning up at Oban for ages and neither Sarah or I were disappointed. What a lovely place. We hiked up the hill to look at the McCaig’s Tower monument which they believe was inspired by the Colosseum. I expected to be underwhelmed but in fact wasn’t. Sarah looked around and then returned to take the p*ss out of me for doing what I always do which is to concentrate on spotting Fiesta and taking pictures of her instead of concentrating on what it is we have come to see.
We went back down to the town in time for our 17.22 tour of the Oban distillery. I have no idea what the reason was for the precise timing but that’s what we were told along with being there four minutes beforehand to collect our tickets!
The tour was excellent and I enjoyed seeing the gin clear distilled liquid pouring out at the end of the distillation process prior to being put in the barrel where it lives for 14 years before emerging as the totally delightful cockle warming coma inducing nectar that is Oban 14. When we reached the point of the tour where the tasting commenced Sarah got stuck in too and not for the first time she grimaced but nevertheless dutifully complied when I told her to swallow it.

Me and my big mouth! On Wednesday morning we left Oban bound for Tobermory in the pouring rain! I have been told that the Sound of Mull delivers some absolutely stunning scenery but we couldn’t actually see any of it on account of the heavy relentless rain and low cloud. It was blowing pretty hard too and we endured a few 28 knot gusts on the way through the Sound of Mull. Well, I say we but what I really mean is me. By this time Sarah had decided that as I have continuously ignored her request to buy a spray hood for the boat she would vote with her feet and was now down below watching the rain from inside Fiesta alongside Max. To be honest I couldn’t blame her because it was bloody awful out there. Oh no, if I have to stand on watch getting soaked, blown to bits and freezing cold then why shouldn’t they put their feet up inside while someone else takes all the responsibility, hell and high water. No, no – I felt fine about it. Absolutely f*cking FINE!
And breath…..
Where was I? Oh yeah, after four hours we pulled into Tobermory and as I looked around to find a book balancing place to anchor Sarah took matters into her own hands and called the harbour master to arrange a berth at the marina. I hate to admit it but for the first time in history she was actually right to ignore me! Everything was soaked and hanging wet sailing suits inside a boat is never pleasant but being able to hook up to electricity and get the fan heater on to dry everything out does make it a lot more pleasant as does not having to get into Doris in the pouring rain everytime you want to go ashore.
Tobermory was fantastic. We both loved it. Very colourful buildings around the harbour, some great restaurants and lovely hotels to go into for a beer. Sarah went running several times and in between downpours we made our way around Tobermory and enjoyed the shelter of the marina which was totally protected from the strong southwesterly wind that was blowing all the rain across. One minute it was bright sunshine and then a big cloud would appear over the mountain above us and that gave a warning of approximately thirty seconds to get under cover! Ten minutes later, bright sunshine again.
After choosing a pub for lunch explicitly to use their wifi so I could upload my last blog we moved to a coffee shop to try their wifi as uploading in the pub had been totally unsuccessful. After giving up on the coffee shop wifi too we went to the information centre to try theirs. The guy in the office was incredibly helpful and didn’t mind me sitting in there for two hours while the blog uploaded at local internet speed. 3 or 4g is unheard of in Tobermory so thanks to him the job got done.

That night we went for a drink in The Tobermory Hotel where there is a lovely little bar before going on to the ‘Spice of Mull’ curry house as I felt the urge to put my ringer through the mangle preceded of course by treating Sarah to a traditional and, even if I do say so myself, rather splendid dutch oven at bed time. She’s a lucky girl that one.
We ended up returning to the hotel bar the following night and although she didn’t say this, the reason we went back there was because Sarah wanted to see Bruce again. Bruce is an absolutely irresistible Bracco Italiano (Pointer) and if I say irresistible then this gives you a measure of the level of Sarah’s obsession with this cute boy. We met Bruce’s owners who are a lovely couple who run a Falconry business in Northumberland and they didn’t mind Sarah’s uncontrollable fawning over Bruce although I’m pretty sure they were running a system of watches to ensure the pair of them didn’t disappear out of the door.

Sarah left on Saturday lunchtime to start her homeward journey. Bus, ferry, walk, bus, hotel and aeroplane the next day is how she got back to London. A massive effort to come and see me and then the same again to get back home. I was sorry to see her leave, we’d had a fantastic week despite me being proved wrong in that the Scottish don’t actually talk bollocks about their weather as the four days of sunshine at the start of the week were balanced by the three days of rain that followed.
I left Tobermory Marina that afternoon and headed to a truly ‘off the grid’ location. A relatively small loch totally surrounded by mountains other than the very narrow entrance between the rocks. I tucked myself up in the corner out of the wind, put the anchor down, made some dinner, got warm, cosy and checked the level of the Oban 14.
I got lucky and managed to complete the trip without getting soaked but as soon as the anchor was down the rain returned and it didn’t stop all night. However, the rain hasn’t actually bothered me at all so far and I think this is the place where that well known saying came from. We all know it.

‘Whatever the weather, you must weather the weather because put simply, sailing in Scotland is the boll*cks’. 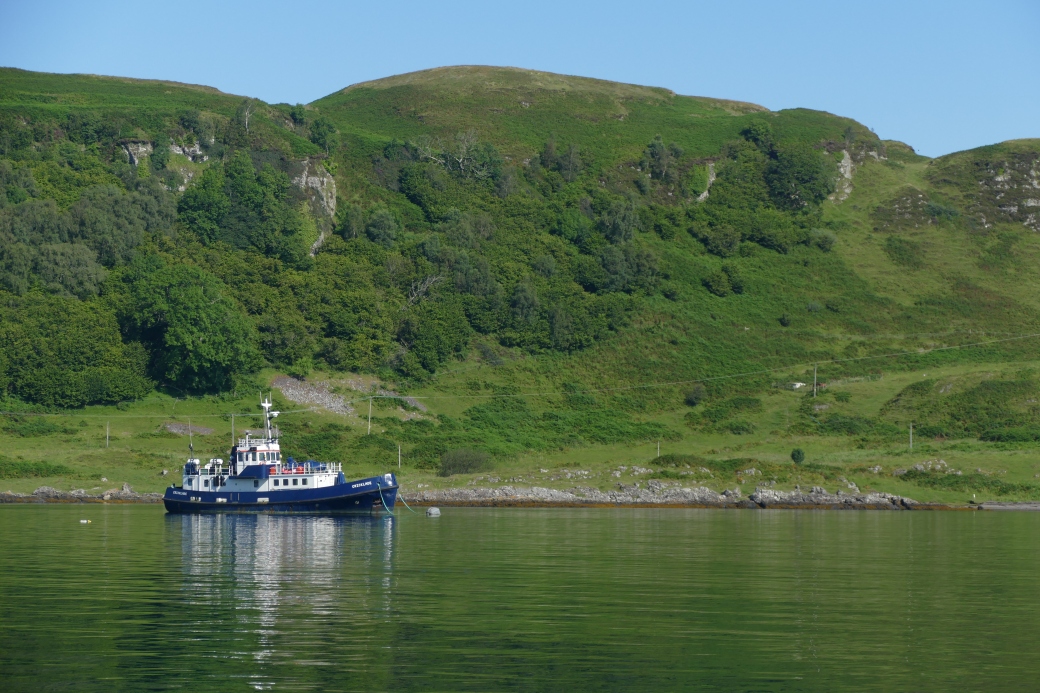 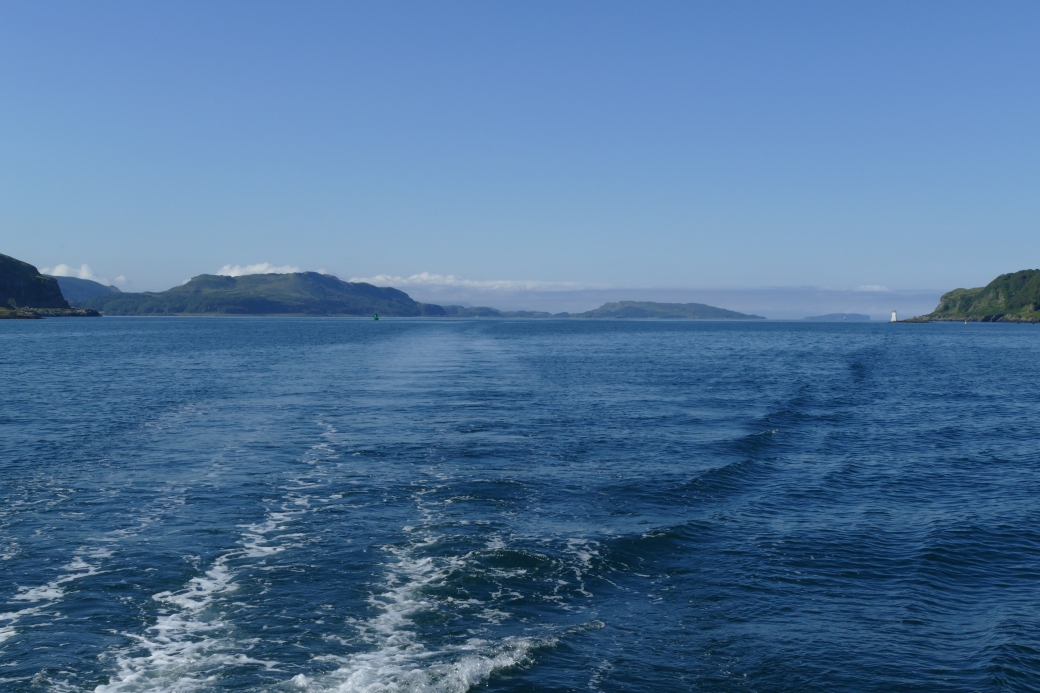 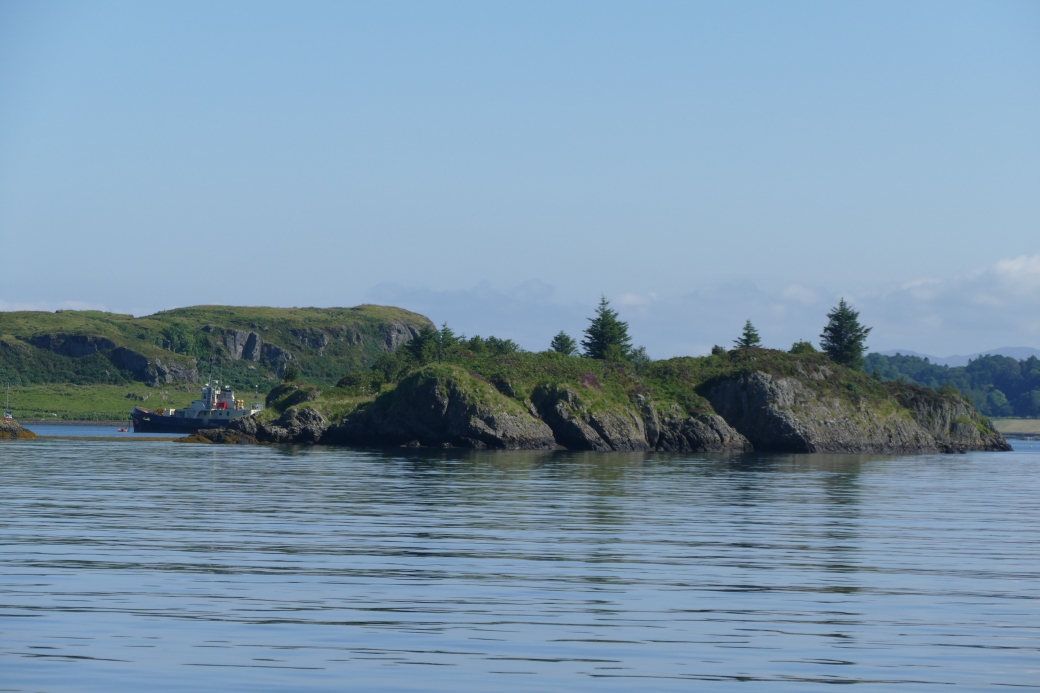 Enjoying the sunshine in Oban, McCaig’s Tower and the view across from Oban towards Oban Marina 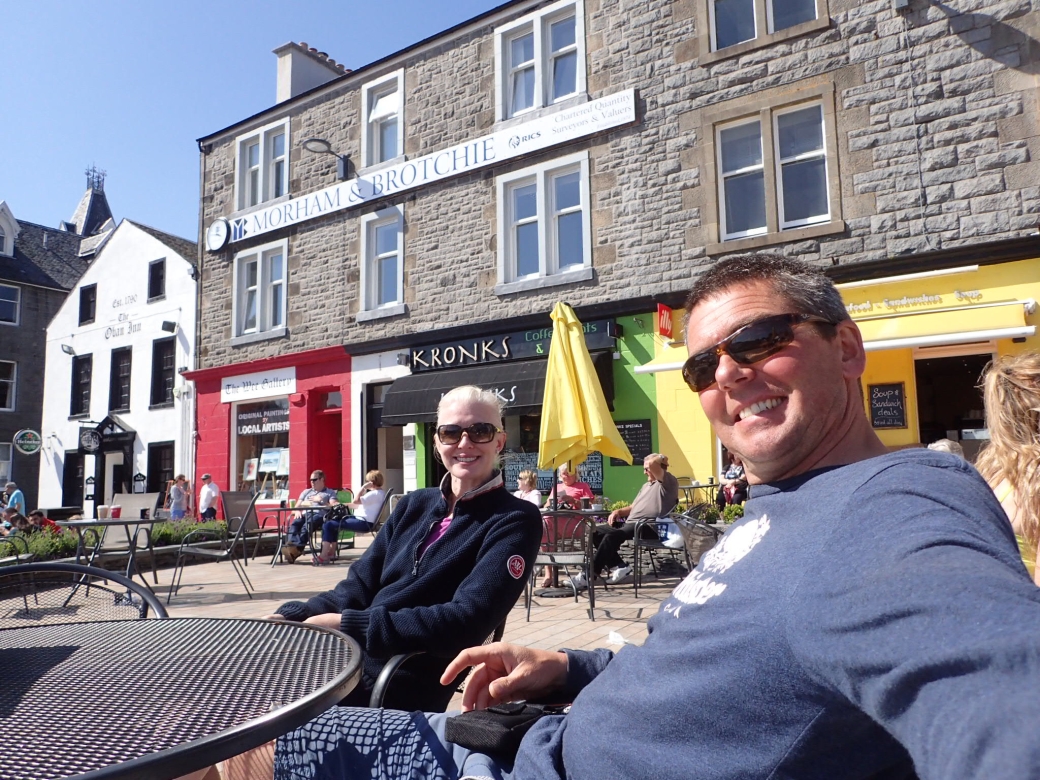 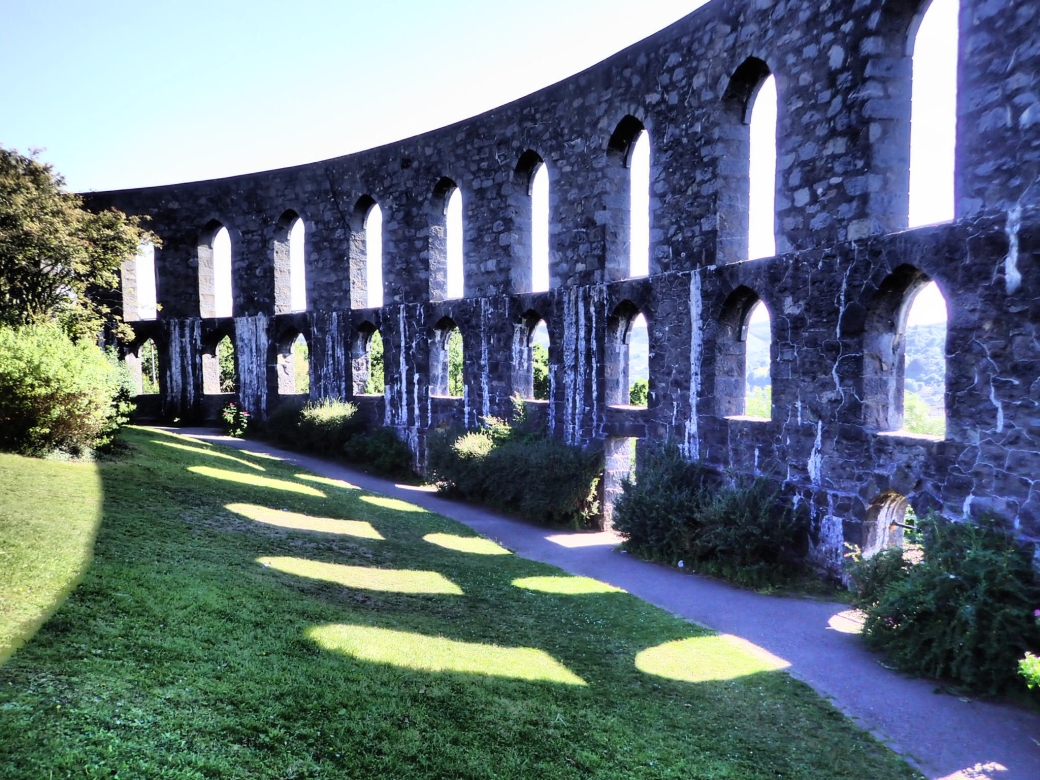 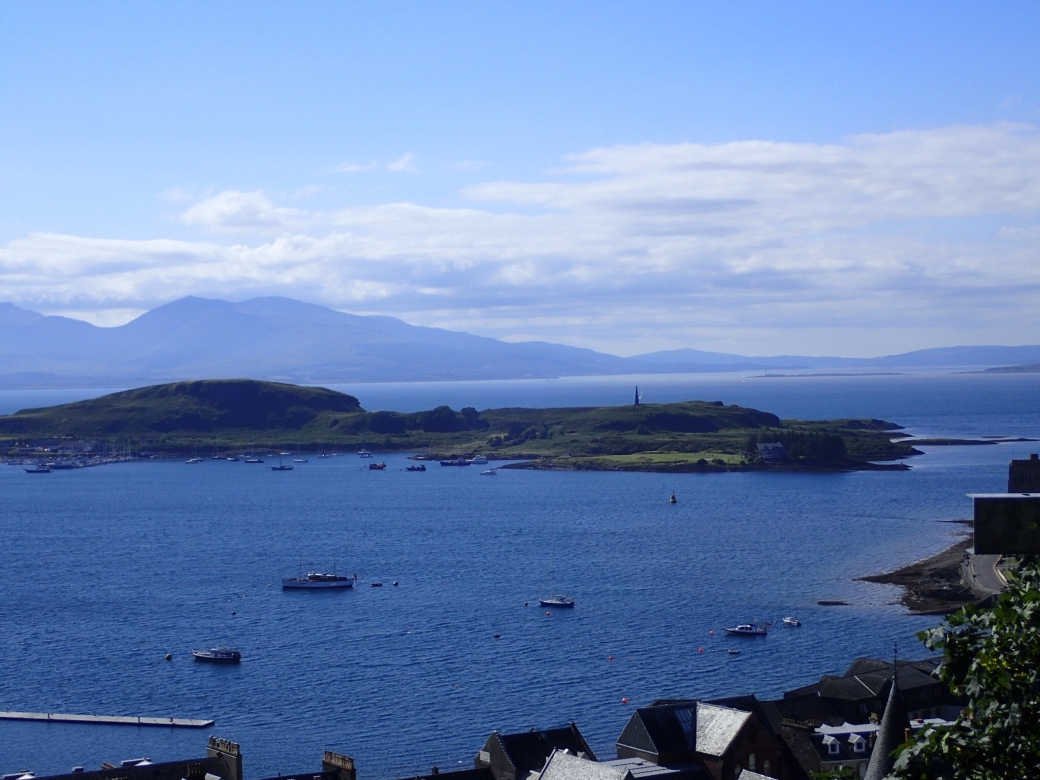 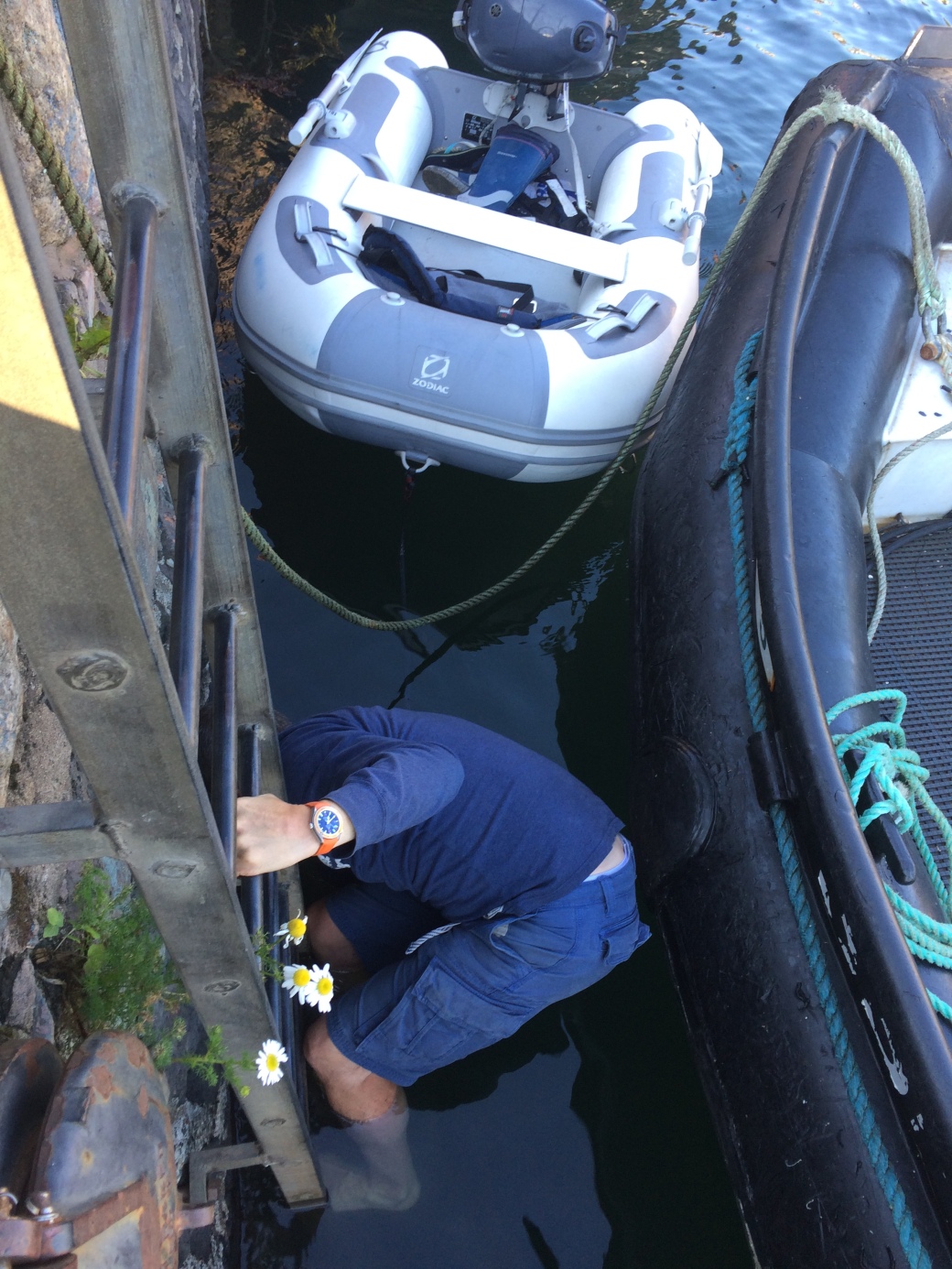 Tobermory, their distillery and me modelling another gratefully received Canadian clothing donation 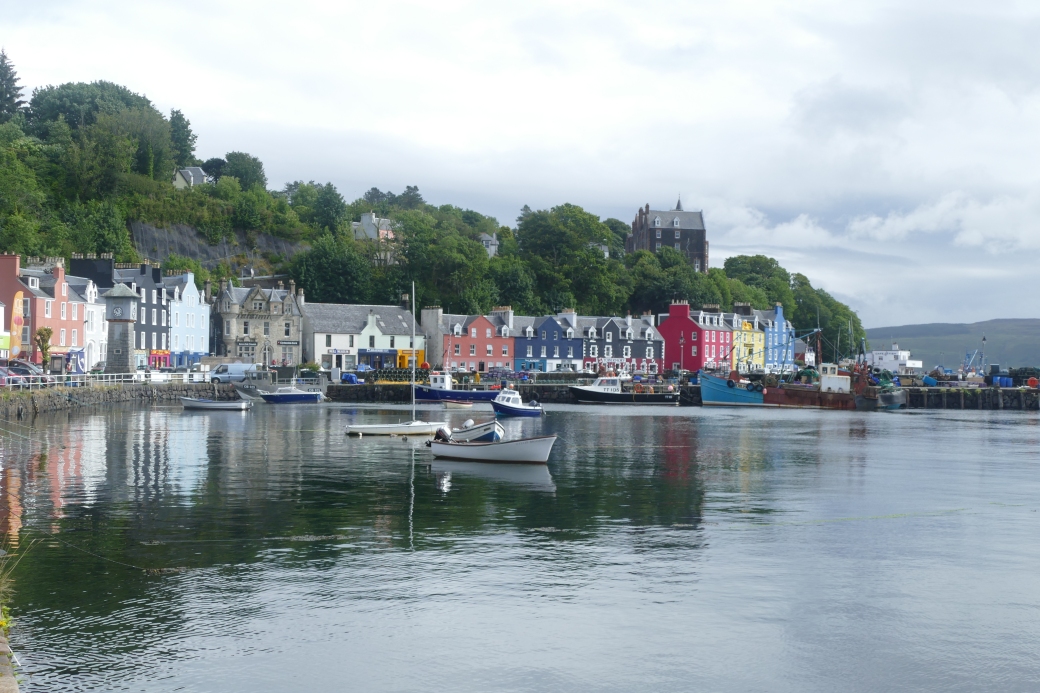 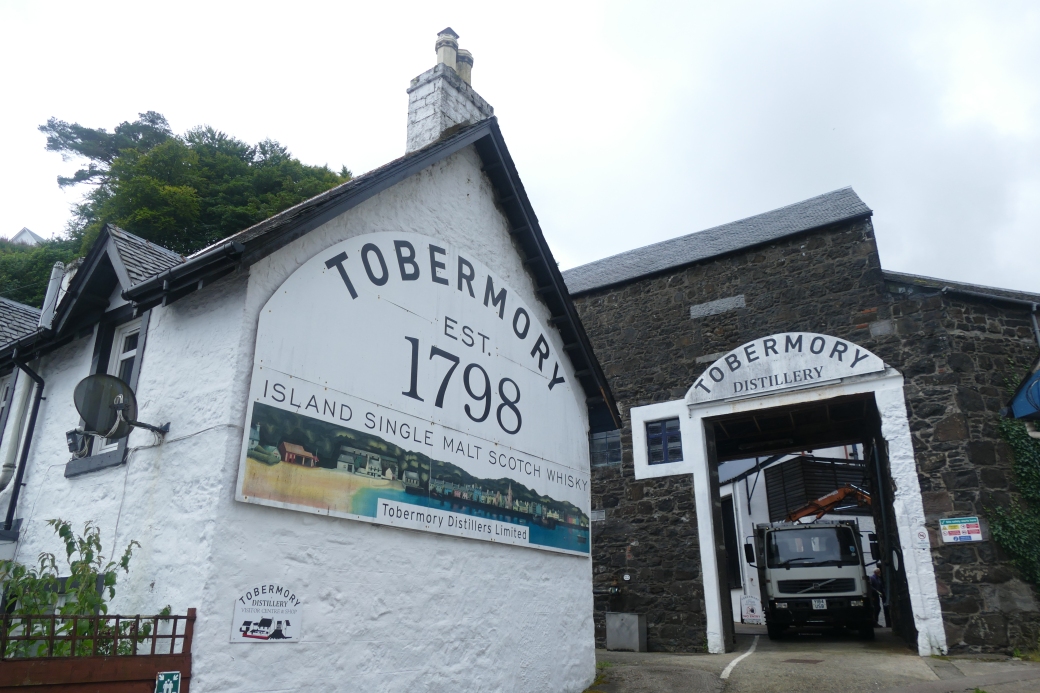 I saw this boat in the middle of the harbour and thought ‘How has that b*stard Russ beaten me here’?????? That Billybob must be the fastest boat on whole damn river! 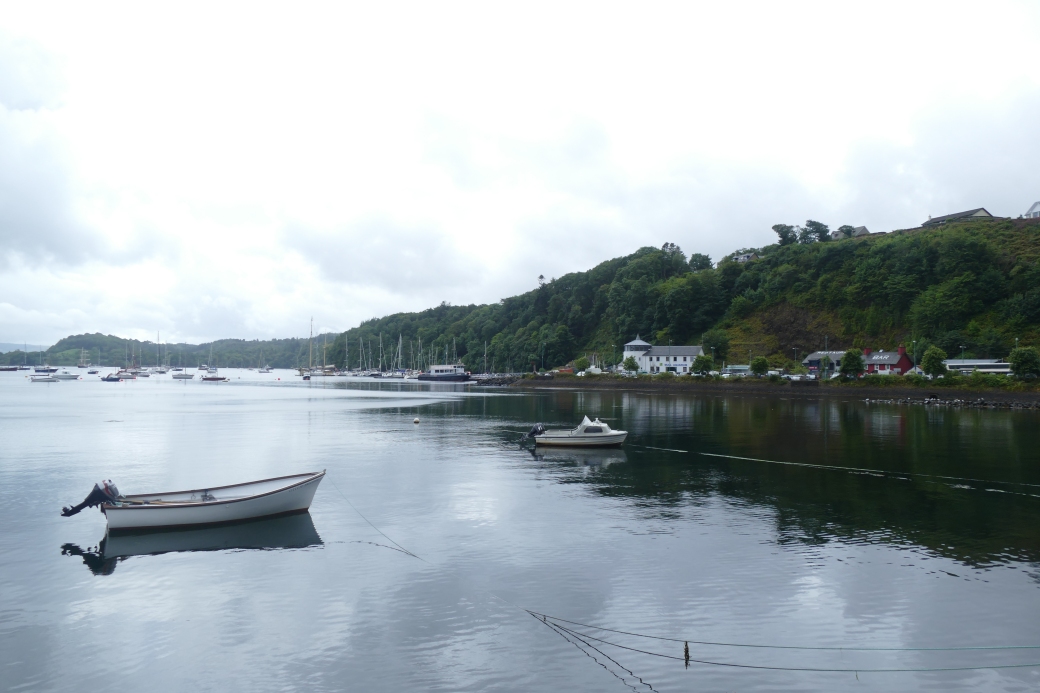 Getting blown across towards Loch na Droma Buidhe and sailing past a unmarked rock. Gotta watch those little fockers 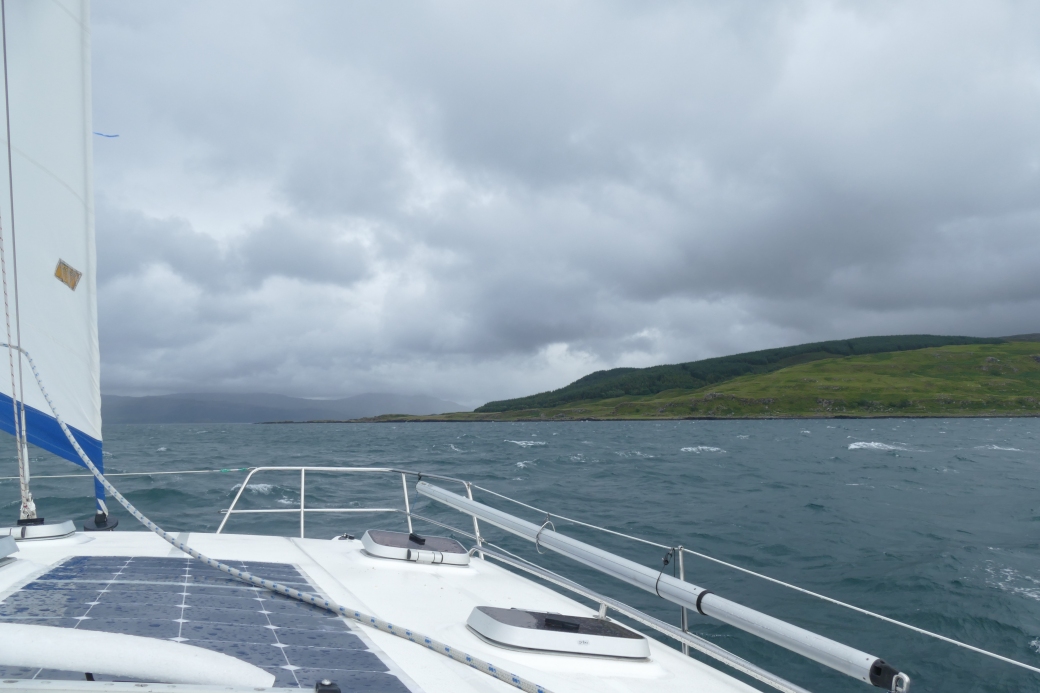 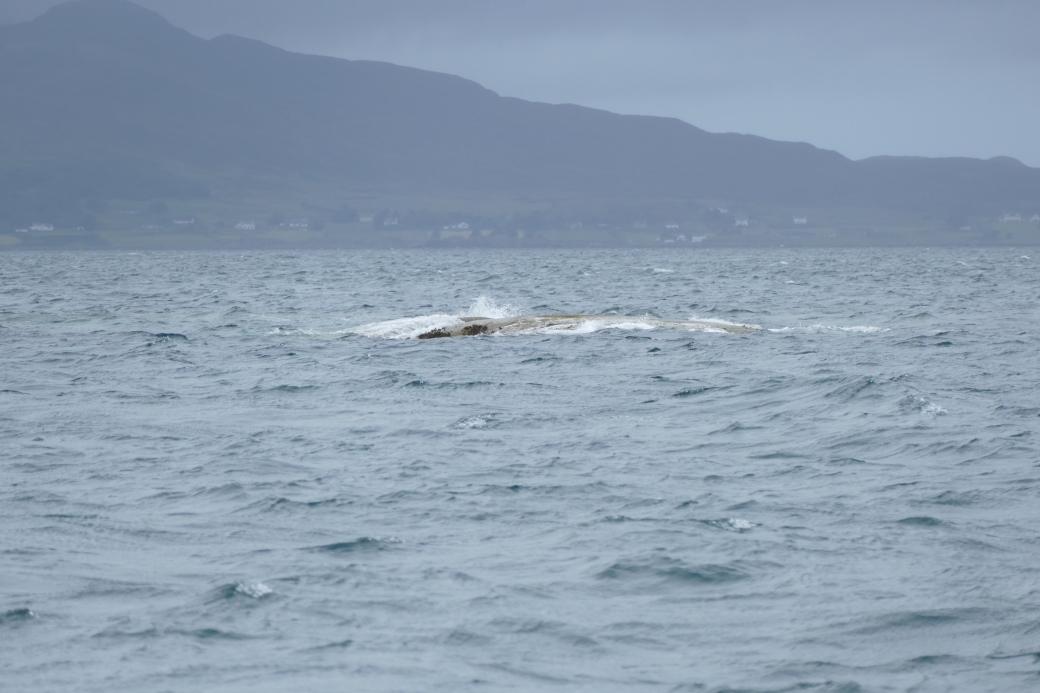 Getting ready to breath in through the gap and then settled in a lovely quiet corner, off the grid! 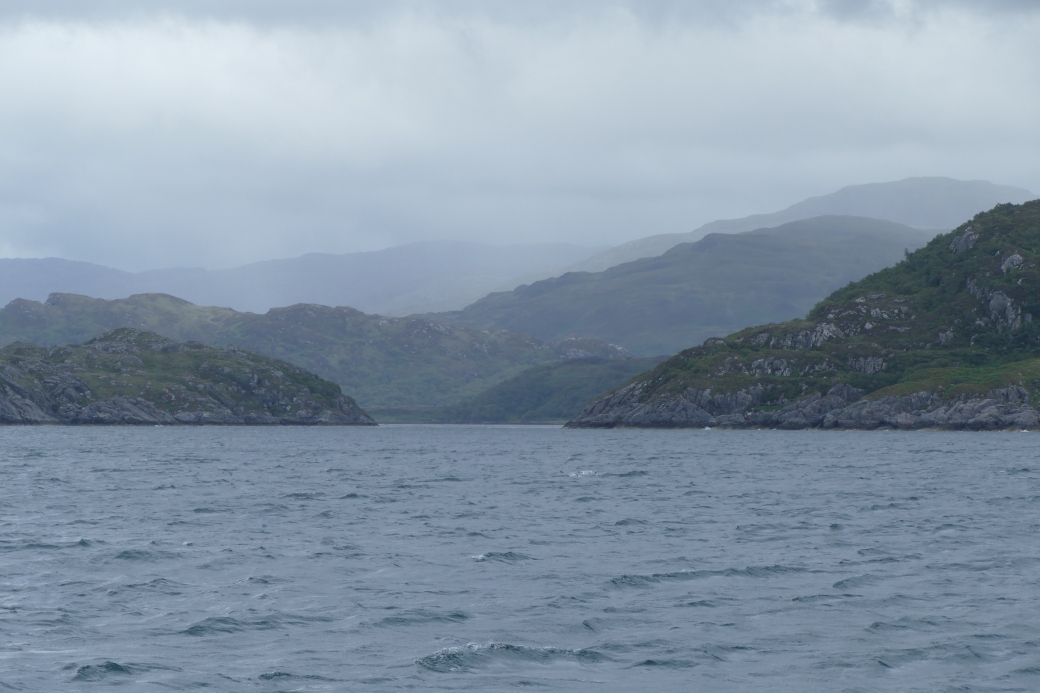 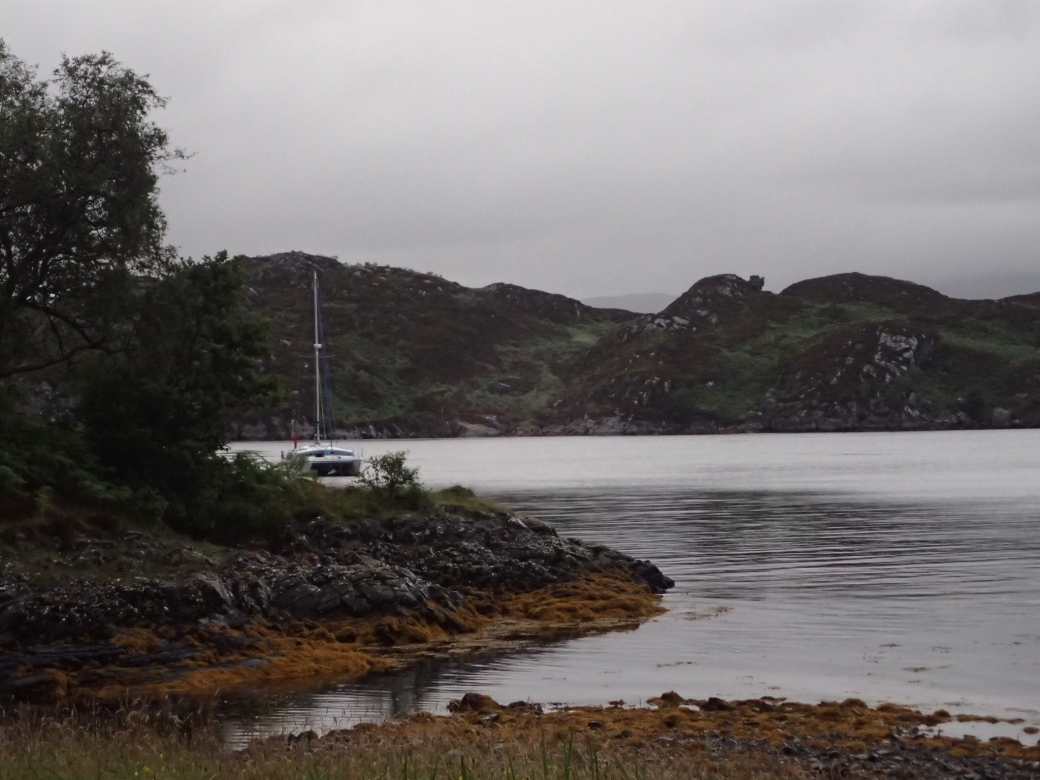