The sun shone and Pirate’s weekend was a busy time for Plymouth. Basically a couple of pirate ships showed up and there were pirates, mermaids and people everywhere. There was even one Somali pirate and although I’m not sure about the political correctness of painting yourself to play the role, no one seemed to mind and in fact more people wanted photos with him than they did with Captain Jack Sparrow! It was family fun by day and carnage by night. Being right in the thick of it in Sutton Harbour, on the Friday night the place was rocking until about 3am and whilst it didn’t really disturb me, I felt like I was part of it from the comfort of my bed and it sounded like a lot of fun so on Saturday night I joined them! I found a bar that was more like a pirate’s cave and the game seemed to be for the blokes to use a frame on the ceiling to demonstrate their manliness by doing pull ups and then encouraging the girls to try and do the same. The game descended into assisting the girls as if they were puppets and whilst some were none too pleased about the interference and quickly got down, others seemed to enjoy the support and hung around for quite some time! I would have joined in but not knowing the local etiquette added to the fact that the floor was too sticky for me to move I decided that a ‘ringside’ seat was enough for me!
My Essex accent seemed to throw the locals and three of them thought I was Australian. Maybe it was just their fascination of going down under with the pull up game but one gentleman in particular wouldn’t believe me and introduced me to his mates as Mark from Australia! In the end it was easier and much less painful just to go with it and after some local brew I stopped caring anyway….
Later on there were some girls trying to round up support to go to the OMG gay bar across the road and at this point I decided it was time to check on Max and head back home. I have to say that some of the people in there looked a bit unruly but there was no aggression whatsoever, just a good fun atmosphere and the puppet show game never lost it’s momentum or supply of players.

On Sunday I spent the day feeling slightly jaded whilst running a cable through from my chart table area into the cupboard where the new autopilot is going to be. This was never going to be a five minute job and having learnt from such previous jobs, I estimated a two hour fight which turned into four. Still, job done and now I am booked to have that special man down on the 22nd which means a return trip to Plymouth as I left Sutton Harbour on Monday morning.
To get in and out of Sutton harbour you have to go through a lock. The lock keeper was really friendly on the way in and slid open his window from the control tower for a chat. When I called him to ‘lock out’ on Monday he said ‘I’m sorry sir, you have just missed an outbound lock so it will be fifteen minutes or so I’m afraid. I will try and be as quick as I can for you. Stand by on this channel and I will call you when we are ready’.
They are so polite and helpful I thought….
‘No problem and thank you, Fiesta standing by awaiting instruction’ I said. Fifteen minutes later I got
‘Station that called the lock who wanted an exit. I can’t keep this lock open much longer, you have a green light but you’re going to miss it’.
Slightly flustered I replied, ‘Hello Sutton Lock, ok I am casting off now and will be there in three minutes’
‘I can’t wait that long, I thought you would be waiting outside the lock gates’.
‘Ok, I will be there in two minutes’.
I felt like I had been given I minor b*llocking and what happened to ‘Stand by and await instruction’? As soon as I was just in the lock and past the gates, the siren went and they closed.
Really? Is that necessary and after such a friendly welcome too!
There isn’t meant to be any idle chat over vhf so I decided to explain once inside the lock that he had said ‘Stand by for instruction’ but once inside the lock his window remained firmly shut this time and I couldn’t see in through the dark glass. It actually made chuckle a bit. Mr lock keeper, yes you do have the power but I’m on an extended sailing holiday and if a two plus grand bill for a new autopilot can’t p*ss me off, you have no chance son. I smiled and waved goodbye and carried on my merry little smug way!

Next stop was Millbrook Pool which is a tiny little inlet on the west of Plymouth sound. It felt like going back to the East Coast from a water depth point of view. You turn off the main Plymouth Harbour channel and the depth goes from about 100 feet to 40 feet and then very quickly down to 7 feet. The channel is completely unmarked and although there is a bread crumb trail on the chart showing the deepest water, there are very few reference points to make any sense of this so it was a case of picking my way along very gently on the rising tide. It got more and more shallow and I got stuck three times on the way in. No one on the banks paid any attention to this so I must have been ‘just another person who has never been here before’. Each time I got stuck it was only a matter of five or ten minutes before the tide floated me off again and I tried a different path. The river bed is mud so you just come to a slow stop rather than fearing hitting anything hard down there. I got right up to the old mill at the end where there is literally no further to go.
The reason for my trip up there was that of fantasy. It is a bit of a mecca for catamarans there and the man who owns the Mill that I was moored up at is called Daz and he makes absolutely awesome catamarans called Dazcats. I met up with him and he gave me a full tour of their facility and I was like a kid in a sweet shop. Oh, the smell of resin, wood, fibreglass and the carbon fibre department whipped me into a frenzy! I love those boats and whilst I wouldn’t say it in front of Fiesta, one day………
I was made really welcome by Daz and his wife Alex. The Mill is their home and the boatyard their business. It’s not a commercial marina at the Mill but a delightful little spot to escape to and I loved the fact that Darren was so keen to give me a full tour. Excellent.
I left Millbrook yesterday morning and had the vaguely intelligent idea of photographing the river at low water so I could see where the deepest channel was and I made some reference points of various sheds or trees or boats to aim at and Fiesta, Max and I slipped out without touching the bottom.

It had been blowing it balls off again the day before and was still pretty fresh on the way out so I was expecting a bit of swell and some breeze on the way to Fowey. The grim overcast day didn’t make it very appealing but I had a deadline to get to Fowey.
Tom, Justin, annoying Mark, Russ and big Kev are coming down for a few days to give me update on all things insurance related owing to the fact that I miss it so much which is very very kind of them.

What could possibly go wrong? 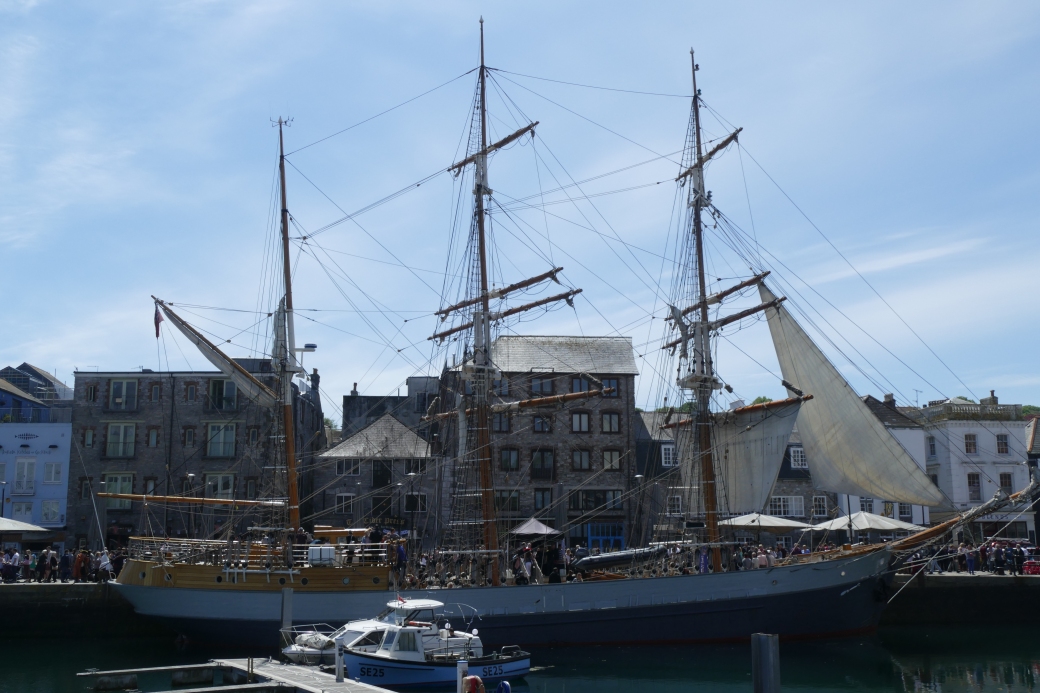 Beautiful Mermaid. I wouldn’t  imagine that she floats on her front….

Millbrook Pool with the tide in and out 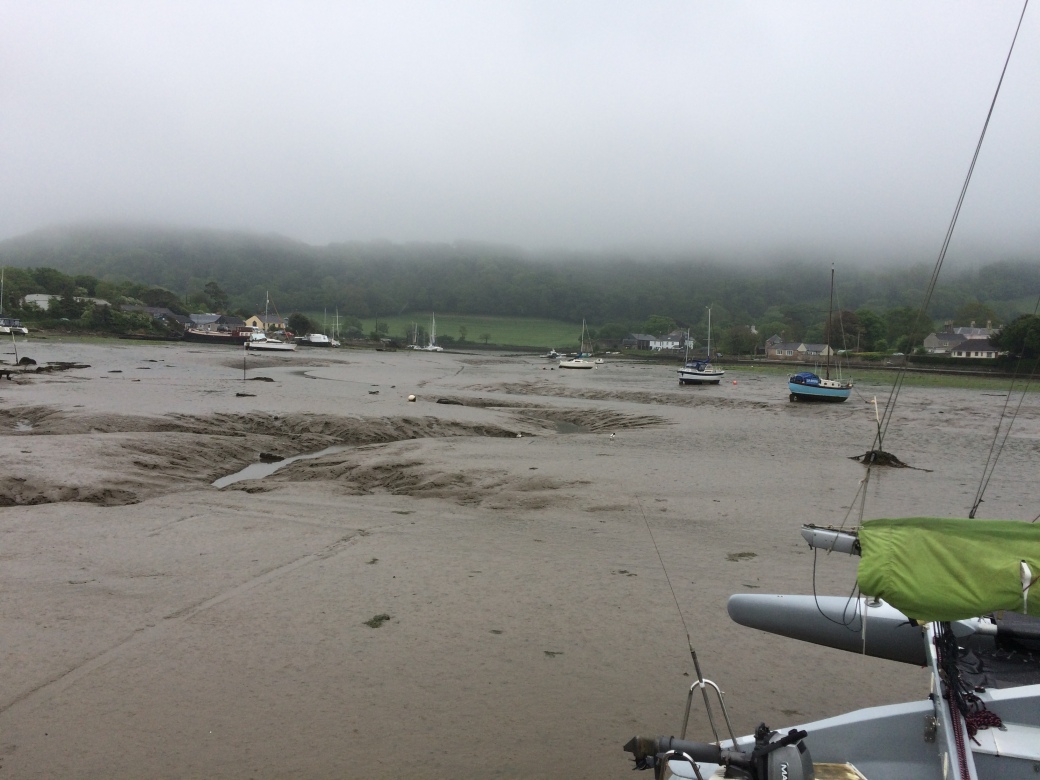 There is a video in ‘Other bits’ of my trip to Fowey!